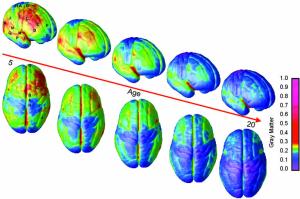 This week I was shown fantastic moving images of the child brain developing over time.

Brain scans taken at several points between the ages of 4 and 21 were stitched together by Gogtay et al (2004) to show moving maps of children’s brain development.

The ‘movies’ show ‘pruning’ too, where brain cells which are not needed are lost. The decrease in grey matter happens in a wave starting at the back and reaching towards the front of the brain. So not all brain cell loss is due to excessive New Year’s drinking. Check out the films to see the brain in action.