Almost everyone I know has had a cold recently, including me (I know, poor me… *tiny violin*). 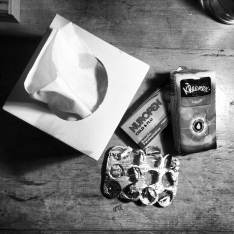 It led to me reading about the common cold virus and what makes us more or less susceptible to it. There is loads of research, mostly describing fairly grim experiments where people are given nasal drops which may or may not contain the virus. Gross. Colds are more common in Winter, granted, but some people are more likely to have one than others no matter what time of year it is. A consistent finding is that people who have been undergoing chronic stress are much more likely to catch colds.

Back in 1991 Sheldon Cohen and colleagues, from Pittsburg, USA, gave nearly 400 healthy people nasal drops containing either a cold virus or pure saline with no infection. People were quarantined in large apartments for two days before the nasal drops were given and for seven days afterwards, with a clinician checking on them daily. Prior to the experiment starting, they all filled out questionnaires to assess how much stress they had been under in the last year, and how miserable and able to cope they currently felt.

The more stressed people reported themselves as being, the more likely they were to get a cold, with really high scores on the stress index correlating with a really high likelihood. Demographics, health behaviours like smoking, and personality variables were all controlled for but didn’t change the finding that stress itself was what increased the chance of catching a cold.

For years this association has been known, but the mechanism behind it has not. I asked Professor Cohen to explain some of the more recent findings which link stress to increased likelihood of catching colds via a specific immune response. Cohen thinks there is “probably more than one mechanism, but the one we work the most on and try to really pin down is the role of cortisol and the inflammatory response.”

The cold is an inflammatory disease: when you are infected with a cold your immune system produces protein molecules, cytokines, that go to the areas of infection and organise an immune response. “The symptoms of the cold are actually caused by the immune system response to the virus,” said Cohen. “In the best possible world the immune system would respond with enough cytokines to address the infection but not so many that the cold symptoms are triggered.”

Cohen’s recent paper shows how chronic stress impacts. “People under chronic stress produce a steroid hormone called cortisol” Cohen explained. “Cortisol production is a self-regulating system. Cortisol is produced and then goes back to the brain and turns off the system that produces it. Receptors for cortisol also become insensitive: they turn inward or become less sticky. This is called glucocorticoid receptor resistance (GCR).”

This means that in chronically stressed individuals the immune system no longer responds to cortisol in a normal way. It becomes desensitised because there is so much of it. One of the things that cortisol normally does is to turn off the inflammatory response in the body. When cells are ‘ignoring’ cortisol the inflammatory response in the body goes over-the-top, leading to greater symptoms of cold in response to cold viruses.

So chronic stress makes colds more likely. Colds in turn though, make us more likely to feel miserable, and not just because we’re fed up of the symptoms. Cohen said: “Illness behaviour like feeling tired and down, turns out to be driven by the release of cytokines”. “They go to the brain and have these effects and make people feel tired and negative.” Cytokines have been implicated in some theories of depression. “It doesn’t mean colds cause depression” warned Cohen, “but other things that alter cytokine regulation could lead to depression.” So feeling blue if you have a cold is the result of specific brain chemistry, not just that the runny nose is getting you down.

Cohen himself does not tend to catch colds easily: “I don’t know why but I seem to be quite resistant,” he said. I asked what advice he would give to help avoid the common cold. “It’s hard to generate advice from our research because for the most part acute (short-lived) stressors don’t play much of a role, it’s long-term stressors like a bad marriage, problems at work, long term conflicts, that seem to be most potent. And it’s not easy to give you a simple suggestion that’s going to resolve them.”

Cohen did use his knowledge of other cold predictors to give some top tips though: “smokers are at greater risk, as are people who don’t exercise at all, wash your hands a lot if you’re in contact with people and make sure you get enough sleep (7-8 hours is optimal).” Finally, and most pleasingly perhaps, he added “moderate drinking is protective.”

So the old hot toddy has some evidence-base, although try to have it before you catch a cold. One recipe here.