Baroness Susan Greenfield’s recent book, ‘Mind Change‘, has brought familiar arguments about whether or not computers are a bad influence into the media spotlight again. Greenfield takes an anti-digital stance, which worries about the effects of video games, social media and search engines.

To say Greenfield’s views are controversial is a massive understatement, and her perspective is well-critiqued elsewhere, including here by Dorothy Bishop and here by Dean Burnett. Suffice to say that whilst it’s important and interesting to think about potential consequences of new media on human cognition and behaviour, many argue that it’s dangerous for an established neuroscientist to write vociferously from an opinion-based position without comprehensive evidence. Greenfield’s academic credentials mean her claims are likely to be given more weight than similarly presented views from a non-scientist.

It’s hard, in fact, to find conclusive effects of digital media on child brain development, partly because of all the confounding variables and the difficulty in today’s world of being able to have a control group which doesn’t become exposed to technology.

In the absence of firm evidence, Greenfield’s pessimistic perspective really contrasted, for me, with a brilliant exhibition just on at The Barbican: The Digital Revolution, which showed off digital media as art, as a learning aid, and just as some really interesting stuff to look at and play with. The exhibition included an archive of computer games and childhood computers, the speak and spell machine amongst them, remember that?

It also had a room full of lights triggered by human movement, so they seemed conscious of where you were. Other pieces included a reflective screen, which made your eyes appear to be on fire, and a wall you stood in front of which showed birds eating away at your silhouette, or which grew wings on you as you flapped your arms. 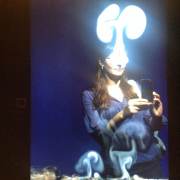 One of the galleries was a space full of games you could sit and play for as long as you liked. I am not a computer gamer, I don’t even have Angry Birds on my iPhone, but I sat for nearly an hour playing Papers Please, a poignant game where you have to control who can come into a country whilst at the same time worrying about your own family and resources.

I was surprised by how compelling I found this game, despite its sad storyline, and I searched on the internet after the exhibition for some wisdom about why these games can be so engaging.

I came across expert Dr Jamie Madigan, author of the excellent blog The Psychology of Video Games. I asked Madigan why he thought people liked computer games in general, and whether he thought they tapped into any particular psychological drive. “People play games because they are fun and they enjoy them. That’s the simple answer,” he replied.

Madigan also had a more complex answer, that recognised the role of ‘Self Determination Theory’. This is the idea that people get motivated by a sense of accomplishment or social connection. “Games, and many other leisure activities, are usually designed to make you feel accomplishment, like you’re developing skills, like you’re making important choices, and like you’re connected to other people,” Madigan said. “Games are engineered to satisfy those psychological needs very, very efficiently.”

So then why do some people tend not to like games? Madigan thinks it’s likely that people who don’t play games either just haven’t found a type they like yet or have got other activities that do a better job of competing for their time: “To each his or her own.” He sees computer games as just another medium, like books or any non-digital format, but he is familiar with anti-digital perspectives such as Greenfield’s. Madigan referenced the historical context: “People used to think novels and the radio were bad for children. Some people even used to think that the game of chess was going to erode young people’s minds.”

Madigan thinks views will become more positive: “A lot of those attitudes will change as the medium evolves and learns what works best for it, and some will change as people who grew up in games get into positions where they can influence policy, public opinion, and scientific research agendas related to games. And as games on phones and tablets become more ubiquitous. A lot of this has happened in just the last 10 years.”

I still couldn’t understand why I liked the sad Papers Please game so much. “That’s an interesting game because it essentially takes something that is work (inspecting and processing documents) and makes it a game,” said Madigan. “But it gives you all the little things relating to achievement, progress, and improving skills that people don’t usually get in work. Clear goals, unambiguous feedback about your performance, some freedom in how you go about doing your job, a feeling that you’re important to the (fictional) people in the game…”

I don’t really want to know what it says about me that the game I like most is essentially another virtual job. Let’s leave that one unanalysed. I’d be interested to know if Greenfield has ever tried playing it though.