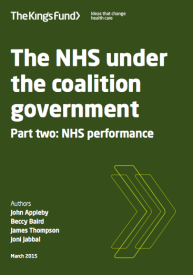 With the UK election nearly upon us I was curious to see some of the stats in this King’s Fund report on the NHS under the coalition government.

The main figures I was interested in backed up my personal experience of working in the NHS since I began in 2005: namely that there has been much less funding available in the last five years than in the five years before. Whilst on the ground this is seen in job cuts, salary freezes and service pressures, the report breaks down the actual funding, employment stats, and patient and staff experiences.

Some of the key points:

The report ends “…even in the toughest of times financially there are always choices that can be made. Now, as the economy recovers, if the NHS is to play its part in ensuring that each health care pound is used as effectively as possible… there needs to be a matching commitment on the part of the public and future governments… in ensuring that the right level of funding is made available.”

Worth bearing in mind on Thursday as we make our choice.

This blog is my personal opinion, not that of any of the organisations I work for.

1 thought on “The coalition’s NHS: what do the stats say?”