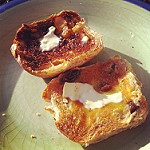 The death of the high street is everywhere at the moment. House of Fraser is in trouble, and its Birmingham branch, formerly Rackham’s, is one of the stores to close. The Exeter branch, formerly the artist known as Dingles, will stay open, though for how long is hard to tell.

I have a nostalgic fondness for department stores. They remind me of going with my mum to have a toasted teacake in the shop cafe as a treat when I was little. Those moments felt really special, oddly grown up, to be in a cafe just us two. The toasted tea cakes always had a lot of butter on, and the loos had a dated picture of a posing woman on the door and those funny sanitary towel bags on top of the cistern which I was too young to know what to do with, but which I admired for their funny Victorian lady on the front.

My mum has memories too, of her and her own mother going to the Rackhams in Brum. Mum took me there as well, when we were up visiting Nan and Grandad, and the cafe felt familiar even though I hadn’t been there before.

Nostalgia is often described as “bittersweet”, it has a sadness and a happiness in it, a pleasurable memory but usually of people or places long gone, like a pleasant dream about someone you loved but who is no longer here.

Constantine Sedikides and Tim Wildschut from the University of Southampton have described nostalgia as a state where the mind is “peopled”, through symbolic connections with important others.

They found a bunch of differences between how the nostalgic group performed on a range of measures and how the control group did, finding nostalgia tended to be associated with increased motivation to go to new events, optimism, inspiration, creativity and sociable feelings. Reflecting on positively remembered past events in this way seemed helpful for going forward.

This is quite the opposite of the effect of the sort of rumination we can sometimes get into when we are looking back over our shoulder at things we’ve done and chewing over them in a self-critical or despairing way, which often leads to it being harder to do the stuff we want to.

What will be the new department store cafe experience? Where will a stolen moment of pleasure be amongst the hectic day-to-day of necessary bits and bobs? What will be the reassuringly same-y place where you can know what to expect, even if what to expect is a dribbly stainless steel teapot and a bit of a queue?

There is one place where I recently had a similar kind of feeling – an atmosphere that prompted memories of other cups of tea… My money’s on a revival of the garden centre cafe.