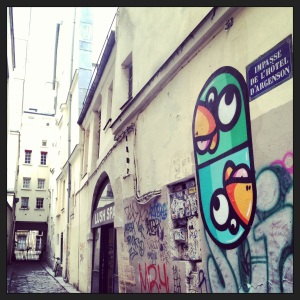 A recent jaunt to Paris prompted a conversation with a friend about Paris syndrome. I had never heard of this, but it is a rare city-specific disorder first written about in the 1980s, where Japanese tourists get so disorientated by being in Paris that they become panicked and upset. It can be linked with feelings of disappointment that Paris isn’t as they have seen in films and read about in novels.

My friend and I had this conversation sitting by a canal in Pantin, in the cold, grey weather, with not a stripy t-shirt or parisian tiny dog in sight. Paris is not always like the soft-focus romantic scenes of it, but I love it nonetheless, despite its relentless amount of dog shit on the pavements. For me Paris is a grubby but beautiful city, crammed with the foreign thrill of people speaking French, cool bars, street art, romantic squares and dark cosy cafes. The euro exchange rate at the moment means these cafes cost you dear, but I still relish in the place.

Not so this minority of Japanese tourists though, who can’t cope with the reality of their dream destination. Paris syndrome accompanies other city-specific disorders like Jerusalem syndrome, which is described as psychotic experiences (like hearing voices or having delusional beliefs) usually of a religious nature, which are triggered by a visit to Jerusalem.

All this got me thinking about what illnesses I could make up to go with places which I know really well. London could easily be linked to Tube Rage Syndrome for example, or Canary Wharf Status Anxiety. Totnes in Devon might be associated with Hippy Syndrome, a sudden desire to try new forms of alternative healing. Events might have their own disorders too: Festival Induced Purchasing Disorder for instance, the uncontrollable urge to buy sequinned hot pants.

Staying at home too much can carry risks to your mental health too though. Staying in and not doing things you feel a sense of achievement about or feel a sense of pleasure in can be a marker of depression. A major component of cognitive behavioural therapy for depression is behavioural activation, or helping people to get back to doing things they feel proud or happy about.

So the moral is don’t stay in, but be vigilant of unrealistic expectations of where you go out. And if you’re going to Paris this month take a jumper.