Why do we like looking at art that uses light and visual illusion? Light Show, at the Hayward Gallery, London, shows work from 22 light artists.

Two of Dan Flavin’s fluorescent works are there, one (‘Untitled, to the “innovator” of Wheeling Peachblow’) emitting a warm peachy glow. In Anthony McCall’s installation (‘You and I, Horizontal’) a beam of light shines through a fine mist in a darkened room. It appears as if the lit-up mist is viscous, as you trail your fingers through it. Ivan Navarro’s work (‘Reality Show, Silver’) attracts a long queue, although I found the experience of standing in a box looking up and down into infinite space underwhelming. I preferred the glittering hanging installation of lights at the entry to the exhibition (‘Cylinder II’ by Leo Villareal) which is mesmerising.

Is there something fundamentally exciting to our vision about the fluorescence and the weird visual tricks? I interviewed Dr David Kane, a Visual Psychologist from Universitat Pompeu Fabra, Barcelona, to get his opinion.

“We like novelty”, David explained, “We are so well adapted to our everyday world, that it no longer fascinates us. Lighting exhibits, perhaps more than any other medium, can place us in a novel, alien world. More than that, art exhibits can often push the visual system to the extremes and expose its limitations. Often it is when our visual system fails to correctly interpret the world that we are most fascinated.”

“For instance the colour room”, said David, referring to Carlos Cruz-Diez’s ‘Chromosaturation‘. In this room the same walls change colour depending on where you stand in relation to the coloured bulbs. When you move from one room to the next, the colour of the walls changes, sometimes whitening, sometimes deepening in colour.

“What’s happening here is a failure of colour consistency, which is the ability to see an object as having the same colour regardless of the background lighting conditions”, said David. “In Carlos’s light room, the lights are monochrome, or pure, blue, green or red. We can’t fully adapt to such lights, meaning that the walls take on the colour of the illuminant. We do get some adaption, and this is where the fun begins. Lingering in one room will cause a partial adaption, and the walls will begin to whiten, but then move to another room and you have to re-adapt. Did you notice the people moving from one room to the next? The exhibit was interactive! I think people enjoyed putting their visual system in flux!”

David used Olafur Eliasson’s ‘Model for a Timeless Garden’, as an another example. In this, water fountains of different sizes play while strobe lights flicker. “It’s like taking different snapshots”, David said. “We see a moving object as a static object. Our visual system is again failing to reconstruct the world properly.” 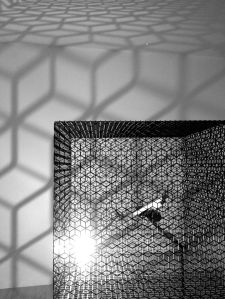 What about Conrad Shawcross’s ‘Slow Arc inside a Cube IV’? This moving light inside a patterned cage creates undulating shadows on the walls. “This is suggesting an optic flow situation when there is no optic flow” said David. “Optic flow is to do with the relative movement of us and the environment. This piece is telling us there is motion, of the room or of ourselves, when there is none.”

David’s favourite artwork was the coloured room. “Partly because I like the colours, they’re so bright and vibrant.”

This was the second exhibition I’d been to this month which had a flavour of visual excitement. Soto, at The Pompidou Centre, Paris, showed pieces where a sensation of movement is created from many linear forms close together. “There are high-frequency patterns that the brain can’t process” said David. “If there is too high a frequency something called ‘aliasing’ happens, when different components seem to interact in different ways.” The result is a sensation of fast movement where there is none, or a difficulty in seeing which way a 3D shape is projecting.

For me, at Light Show, there was something I liked about fluorescent light alone, trickery aside, just the extreme light and colour. I also liked the darkness, especially of the room with the mist, and I liked the idea (if less the execution) of Katie Paterson’s ‘Light Bulb to Simulate Moonlight’. At Soto I liked the sensation of fast motion that many of the exhibits gave, which reminded me of running past railings when bright sunlight is behind them.

Perhaps as well as enjoying the bamboozling of our visual systems, there is something about capturing familiar light experiences in unfamiliar ways. Sunlight, moonlight, the glitter of starlight and reflection… All of these light experiences are represented in the artworks, but in a man-made, off-kilter fashion. We are presented with echoes of natural phenomena in unnatural ways.

Whatever the reasons for the enjoyment, I recommend giving your visual system the chance to fail. Both Light Show in London and Soto in Paris are definitely worth a look.

For more visual illusions try these links:
Rotating snakes
The spinning dancer
Or if you happen to be in California: www.Mysteryspot.com